This post is the continuation of Sound Routes: Maghreb / Morocco – Agadir & Taghazout (Day #4). 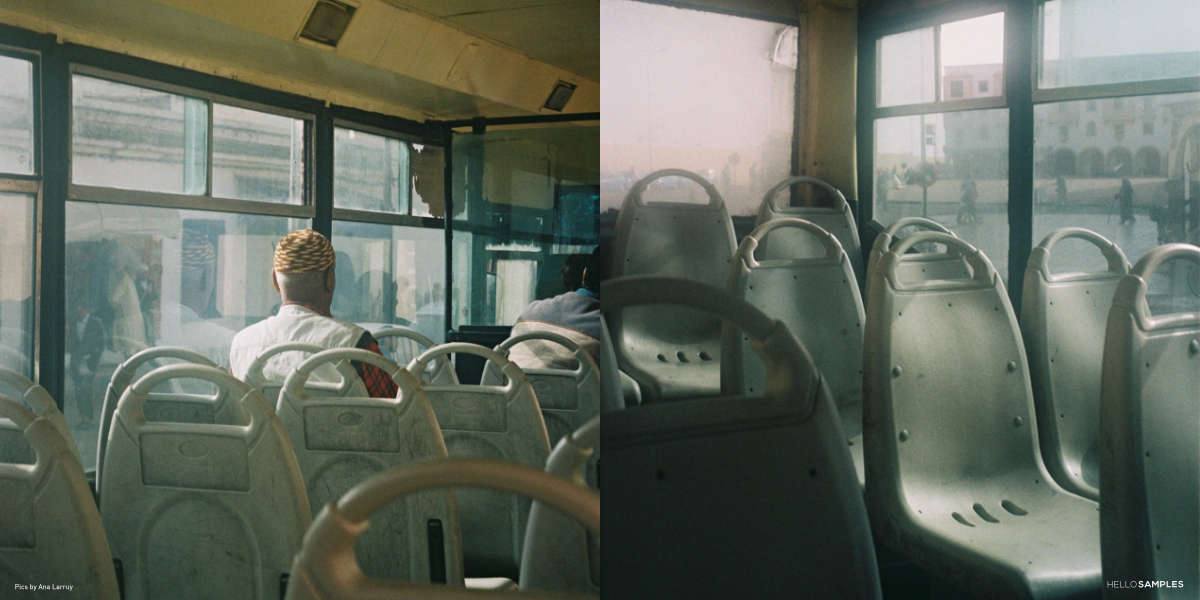 Ramadan had finished the night before and the joy of celebration could be smelled in the air of this old Moroccan coaster city, also called ‘the African city of the wind’. Coinciding with the golden hour, we got off the bus and walked through the big gate of Bab Marrakesh into the old medina of Essaouira.

The first thing we did after finding our riad (not always an easy task), was dropping off our bags, taking a shower, and get ourselves ready to explore the city… Ana and I felt really great that evening. Our warm welcoming into the city had opened us a great appetite for celebration and, apparently, the only remedy for that was a fresh pint of beer. Finding a place where we could drink them became our target, having in mind that there are few places in where you can buy spirits in a Muslim country. The most evident solution is to find a touristic bar or restaurant, in where people like us gathered and felt at home for some hours. We found easily a restaurant, live music bar & discotheque, all together in a tall building, next to the Moulay Hassan Square. We spent the next four hours on a crowded terrace, drinking, talking about life and listening to the most known hits of all times, here’s an illustration: 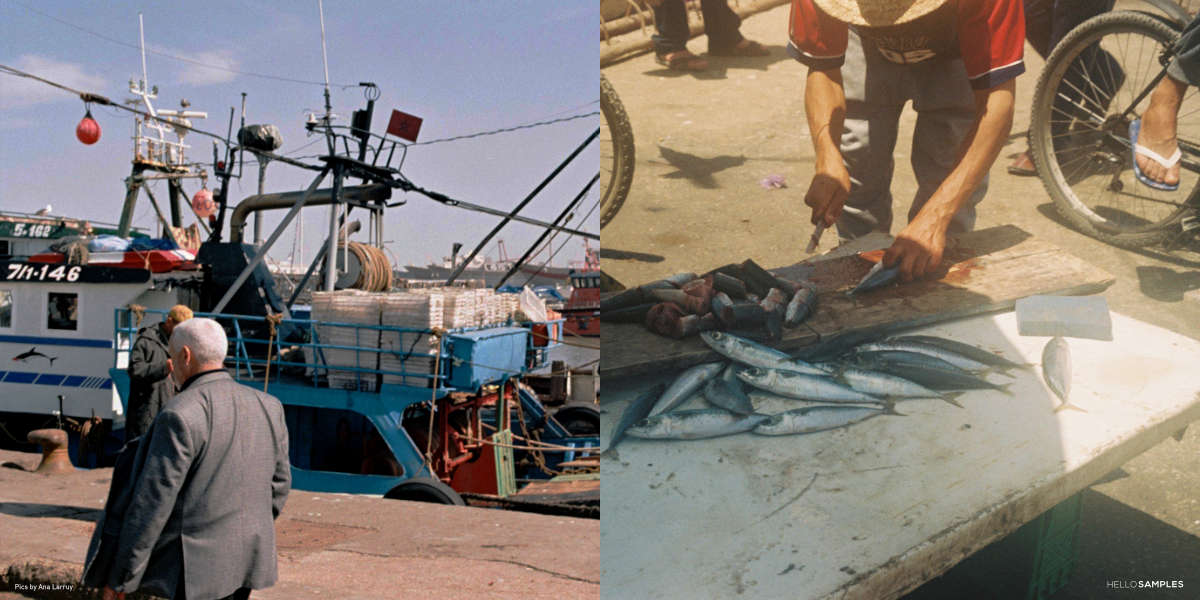 On the next day we spent the morning in the city’s port. We observed and admired the fisherman’s selling their fresh and shiny catches, repairing their fish nets and cleaning their boats. Also, a group of kids that were playing and jumping among the tied ships.

It was suddenly lunch time, and we were hungry; “seafood” hungry. A very typical thing to do in Essaouira is to buy the fresh catches in the market and take it to a kind of stall, in where they will grill your fish, for an affordable price. We ate a delicious tilapia, cuttlefish, squid and grilled vegetables. Such a feast for both stomach and eyes! 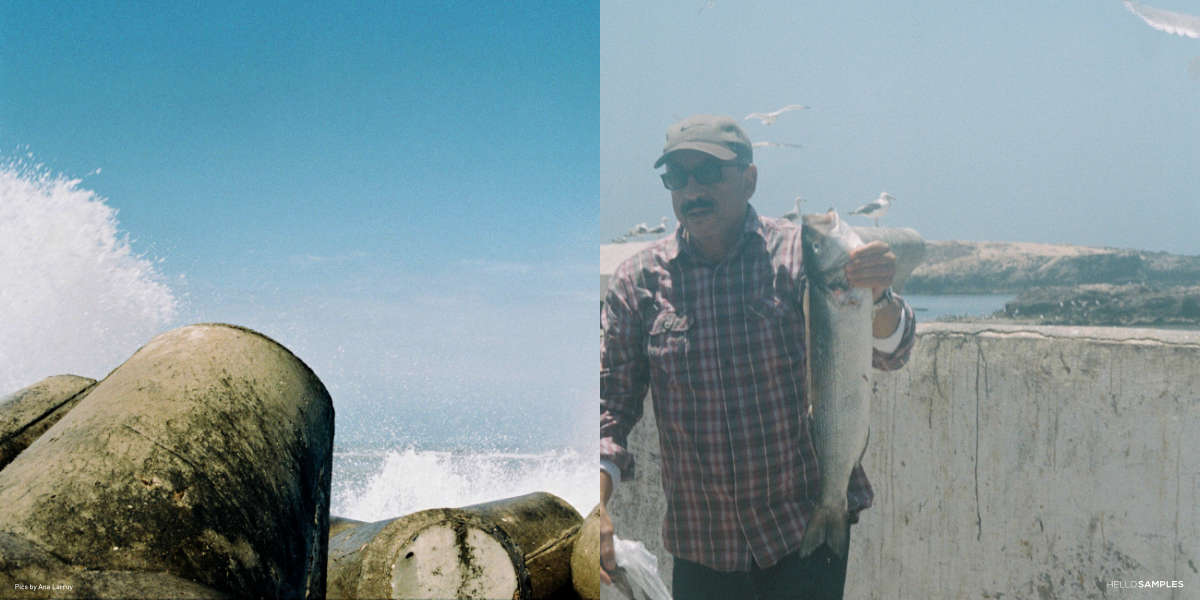 After the banquet, we had a coffee on a terrace in front of Moulay Hassan square, in where I had the pleasure to meet Mr. Noureedine, an old man who ended up offering me the most unexpected recording of the journey. Claiming that he was “Le Phil Collins Marocaine”, he genuinely versioned “In the Air Tonight” and he even wrote a note in my book for Phil Collins, just in case I came across him someday. 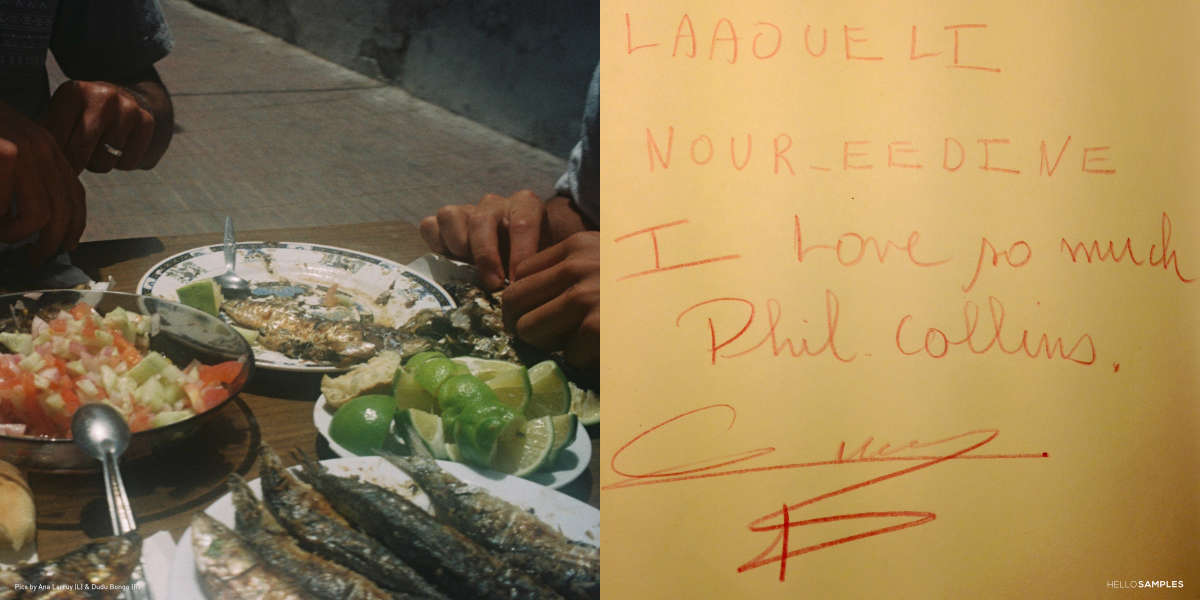 I dedicated that evening to reading, drawing and making a bamboo flute on the riad’s roof. At 7pm I took advantage of the quietness of the environment to record the city’s ambiance from the terrace, basically some seagulls and other birds flitting around the housetops.

Relying on the fact that at 7:45 there was going to be the Maghrib Adhan (or evening call to prayer), I did a long recording of one hour that I later analyzed and chopped out. It is fair to say that the recording of the adhan is one of my favorite recordings so far, given that it’s spatial deepness and it’s dynamic progression were totally spontaneous.